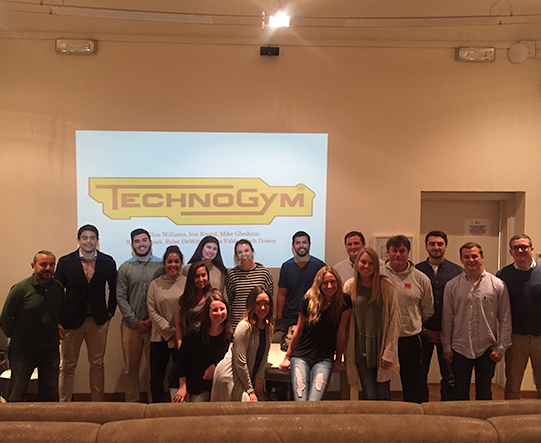 Spring 2017 students from the Sporting Goods Industry course presented their final project yesterday to Marco Dartora, International Trade Marketing manager, and Andrea Rotta, Digital Product Development Manager for Technogym S.p.A., the main European sports equipment company among the top companies internationally. The project around which the course was developed was organized directly with the company and represents an excellent example of Experiential Learning, the basis of Florence University of the Arts’ academic philosophy, applied in the professional world with a strong international feel.

After meeting with the managers of Technogym during the first lesson of the semester, students were asked to develop a new app for the company which is still in its planning phase.

The students worked on the application, developed for a general audience, and elaborated a detailed market analysis, with particular regard to the US market. They were also required to create a positioning map and work on data related to both social media interaction and platform usage. They created a SWOT analysis used to evaluate the Strengths, Weaknesses, Opportunities and Threats of the “Technogym” App and the “MyWellness” system, an athletic training cloud service.

The project is aimed at developing the Technogym App for its upcoming release, including better positioning and increased interest for users of all ages and training goals.

Technogym has a solid reputation for producing gym equipment, but is looking to broaden the age range of its users along with investing in the overseas market.

Social media integration, which many competitors take advantage of in often very different ways, as well as various interactive solutions proposed by the most popular wellness channels were reviewed in order to develop the most appropriate app for Technogym. The world's most downloaded apps were also reviewed, deconstructed and compared with the two Technogym Apps that are already on the market in order to discover new possibilities for the enhancement of existing tools and new opportunities for growth for the Italian company.

Technogym asked the FUA class to carry out a transparent comparison and analysis of the gaps that their Apps have, both in general terms and with respect to their competitors. At the end of the students’ presentations, Marco Dartora and Andrea Rotta were pleasantly surprised by the results achieved.

Dartora stated that the “company finally had a thorough and clear analysis that impressed us quite a bit for how in-depth and precise it was. The students also suggested possible fixes for the defects that they found in our Apps that are great medium to long-term solutions. This project proved very useful for the upcoming release and we treasure your support.”

Future editions of The Sporting Goods Industry at FUA can be consulted at the academic schedule of courses.