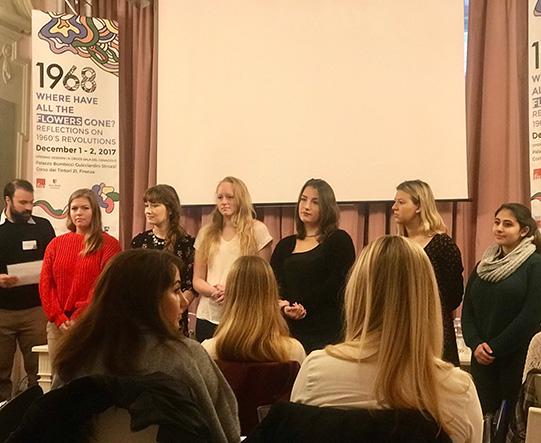 This year at the FUA SUNY Stony Brook University 2017 annual fall conference, 1968 Where Have all the Flowers Gone? Reflections on 1960’s Revolutions, FUA students had the chance to take part in panels discussing various topics from the 1960s. The classes that participated in the conference panels were: Human Rights and International Criminal Justice; Ethics in a World Context; Cultural Perspectives; Intermediate Digital Photography; Fashion, Media, and Culture; and the Contemporary Italian Literature course.

The students began their preparation for the conference by reviewing the overall topic and strategizing with their instructor to develop the concept of their panel. They were required to submit research, suggestions for panel content, presentation options, titles and abstract proposals. The students then held a trial run of the presentation verifying the content and presentation format, also testing the presentation timing.

One of the topics from the Human Rights and Internationals Criminal Justice course focused on the social issues and music of the 60s. The students discussed how with protests and activism come songs about these issues. “In that period songs have enabled people to sing the words they could not say, they have given voice to common struggles, given strength to face aggression or repression, channeled anger into dignity in resistance.” The students suggested that the 60s might have been the final great era of songs about protests which can inspire and unify communities.

The Contemporary Italian Literature students created a discussion about Italian Feminism in the 1970s. “Italian women sought to redefine women’s identity and roles in radical opposition to the traditional values of Italian society.” Many feminist groups were formed in the 1970s in major Italian cities promoting self-awareness. Some of the topics which the women debated about were equal pay for work, divorce, abortion and violence against women among many other topics. The students analyzed some of the most important texts produced by Italian feminists of this time.

“When thinking of the 1960’s revolution, ‘rebellion’ is one of the key words that come to mind.” The Cultural Perspectives students spoke about rebellion in the 1960s. The students expressed that whether it was in the form of protests or creative energy, the “rebellion” of this time changed the world forever. The students identified three historical figures whom represented the idea of “rebellion.” These figures consisted of Mark Rudd, Caroline de Bendern, and Margaret Hamilton. These people broke the norms of society and represent a time of rebellion which was so powerful and influential.

The Fashion, Media and Cultures course discussed how the landing of the first man on the moon effected the fashion of the time as well as present day fashion. Because of the first moon landing people began to believe that anything was possible. The students researched fashion from the 1960s to modern fashion. Designers such as Emilio Pucci showed the influence of space travel by designing the 1965 Bubble Helmet. “Chanel’s Fall-Winter 2017 runway show featured models strutting around a spacecraft and Gucci’s Fall- Winter 2017 campaign titled, ‘Gucci and Beyond,’ featured aliens wearing huge hats, clashing vintage prints, and bejeweled eyewear.” The students goal was to provide the audience with a deeper understanding of the designers sources and interpretations while keeping with their brand image.

Revisualizations: Looking at the 1960’s through the rear-view mirror, was the title of the Intermediate Digital Photography class panel. “The nearly 50 years passed from the decade that has been labeled as revolutionary, the 1960s, raise the opportunity to investigate what is the meaning of revolution when revisited from future generations.” The students created a portfolio of images which explore the themes of the 60s as seen today. The images investigated themes such as the civil rights and feminist movements, religious developments, technological progress and the influence of art and fashion as a link between past and present.

The diverse panels of students brought a new point of view to the conference. It was very interesting to understand how students today reflect on the 1960s and how things have changed or stayed the same.