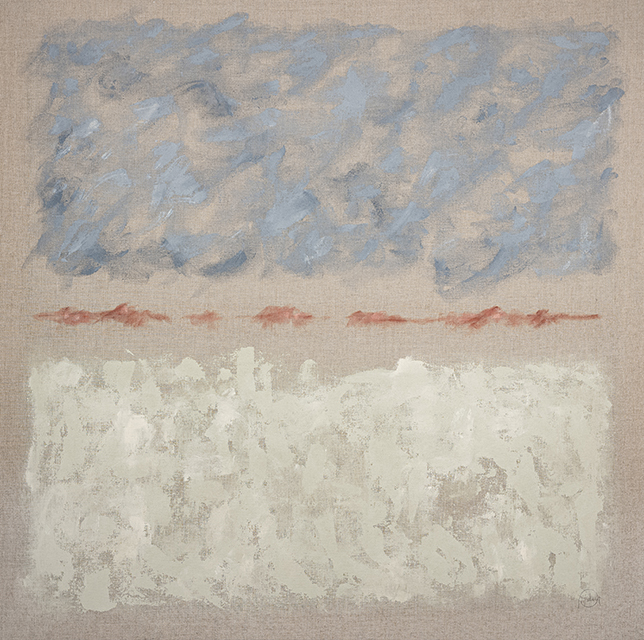 The “Almost Nothing” exhibit by Nicoletta Salomon opened on Thursday, June 3, 2021, at 6 pm
in Via Ricasoli 21, and showcased 23 contemporary art pieces. The artworks were exhibited at
the Corridoio Fiorentino, which collects, preserves, exhibits, and showcases artwork by FUA-
AUF students/faculty and professional artists.
Nicoletta Salomon is a writer, painter, and faculty member of writing and fine arts at FUA-AUF.
Salomon said that art is a way of life and a way for her to communicate with others. Her
canvases and paintings depict her thoughts, emotions, and memories. Salomon created her pieces
for the exhibit during COVID-19, and they represent her thoughts and feelings from that time
spent in isolation. Her main inspiration for this project was the silence experienced during the
pandemic’s lockdowns and limited interaction with others.
Though she is used to working from home in her home studio, Salomon shares that this
experience was different. She was deeply affected by the silence around her, and concentrated on
the feeling of stillness. The sense of solitude was not physical because she had her family with
her, but rather, it was a spiritual solitude to which she eventually became accustomed. She is
unsure of whether enjoyment can be located at all within the experience, but she definitely
became accustomed to it out of necessity. Salomon’s depiction of inner silence and the feelings
associated with are evident throughout the exhibit. The absence of stimuli changed her
perspective on her art and taught her how to concentrate more on her inner self.
The background to these paintings is lighter than her usual darkness, and the colors used are
more subdued – there is a calmer, quieter sense to them, making them lighter overall. She chose
to combine this lighter palette with unprimed linen to eliminate the duality between color and
canvas, for them to be one unified element. "I didn't want my canvas to be just a supporting
[base], something that passively bears the colors," said Salomon.
The works could be interpreted as landscapes. Salomon used squares and horizontal lines, with a
frontal perspective of air and water in them. They don't touch, but instead, they float in proximity
to each other. This certainly not the only interpretation, and the works can be seen figuratively or
non-figuratively. She enjoys how her painting can be read differently by each person.
Her feelings toward the solitude experienced while creating these paintings can also be seen in
the brushstrokes on the canvas. There is a movement to her brushstrokes that is varied and shows
that they are not peaceful. They sometimes show quiet movement, at other times they are rushed.
What emerges is her changing relationship with solitude during the pandemic, and the peace and
struggles she faced.

The title "Almost Nothing" refers to how Salomon stripped the paintings down to their bones.
This project allowed her to experience painting with a limited palette and a bare canvas, and the
name refers to the creative process rather than the outcome.
Though the thoughts and emotions portrayed in these works of art are her own from the
lockdown, Salomon’s overall message for exhibit viewers is the "freedom to project their own
views and emotions" onto her paintings.
The exhibit can also be viewed online at the Corridoio Fiorentino digital gallery.